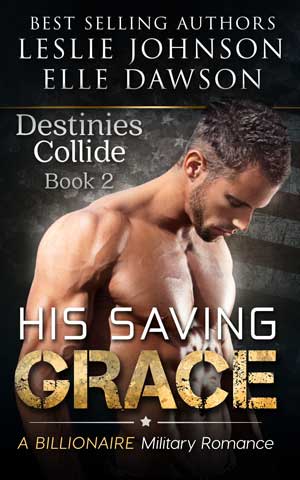 Grace loves her new life as a traveling therapist and nurse. She’s in charge and is relishing in the freedom. She’s seeing the country, meeting new people and doing new things. She’s happy. Almost.

Imagine her surprise when she’s called for an interview in California. Overlooking the ocean. In a mansion. No, not a mansion, a compound with guest cottages bigger than a normal person’s house. She knows she’ll love the job, if she can pass the interview with the queen of all bitches and her husband, a famous billionaire.

Then she meets their son. Link Duffy. He’s tough, bitter, and seeking revenge. His entire life was changed in an instant, and he’s hurt and mad as hell. But there’s something about him. Something so raw and fierce. And vulnerable. And sexy as hell. And when he looks at her, she knows their destinies collided for a reason.

Destinies Collide is the second novella in the His Saving Grace series, a hot billionaire military romance.